Trace Evidence is defined as the small bits of matter that are transferred from one location/person, to another, whenever there is physical contact between two surfaces. Traditional trace disciplines include the microscopic comparison and classification of hairs and fibers and the chemical analysis of fibers, glass, paint and fire debris. Trace evidence encompasses an ever expanding body of evidence and the section frequently acts as a “catch-all” for any unknown item of evidence. A wide variety of polymers, plastics, chemicals, minerals, soils, wood and building materials, fiberglass and tapes can also be analyzed. 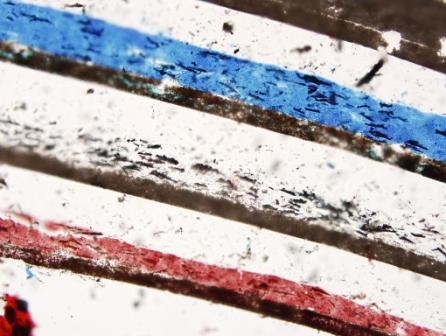 Paint evidence is commonly encountered in the forensic laboratory. It has several physical and chemical characteristics that can be characterized macroscopically, microscopically, and instrumentally. These characteristics can include layer structure, color, texture, thickness, gloss, anomalies, and chemical composition. Architectural paint and automotive paint are examples of paint evidence received by the Trace Evidence section.  A more detailed informational flyer is available. 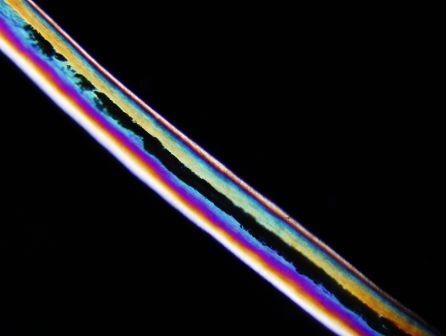 Hair examination may consist of observations of the structures found in the shaft of the hair (the cuticle, cortex, and medulla), the root end, and tip of the hair. The cuticle of the hair is the outer protective layer of the hair shaft and it can have a distinctive appearance depending on the species of origin. Examining the root end of a hair can provide information as to the removal of the hair (forcibly pulled, naturally fallen, or broken). Hair evidence is commonly found and crime scenes and it has the potential to provide good associative evidence. Depending on the condition of a hair, it may also be amenable to nuclear DNA analysis or mitochondrial DNA analysis.

Tape:
Pressure sensitive adhesive tapes are often associated with a wide variety of criminal activities. The most common types of adhesive tapes encountered by the Trace Evidence section include duct tape, electrical tape, and packaging tapes. The term “pressure sensitive adhesive” refers to a material that will usefully hold two surfaces together solely by surface contact without the need for any physical or chemical change other than slight finger pressure. These tapes can be examined to determine possible manufacturing information or for comparison of a questioned piece of tape to a known roll of tape, in order to determine a common origin. A physical match between two pieces of tape is also a possibility, which indicates the two pieces came from the same source.  A more detailed informational flyer is available. 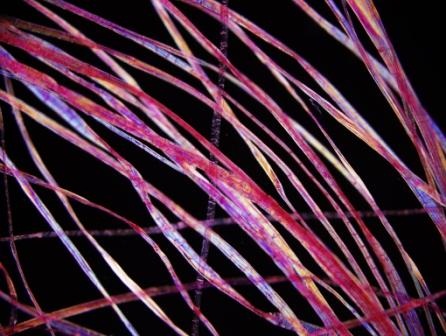 Textile fibers (natural and manufactured) surround us in our daily lives. Therefore, they can serve as a valuable tool in criminal investigations. Fibers can be in the form of clothing, carpeting, upholstery, cordage, or many other uses. The fact that fibers transfer between individuals and between an individual and the environment, is the founding principle of examining fiber evidence associated with crime scenes. Fiber examinations in the forensic laboratory include both collection and analysis of fibers. During an examination fibers are classified according to type, they are analyzed to obtain physical, optical, and chemical properties, and they are compared to known fibers, when available.

Fire Debris:
Fire debris analysis includes testing of evidentiary items associated with fire scenes for the presence of ignitable liquids. Items tested vary from liquids to charred debris or uncharred items such as carpet, containers and clothing. By analyzing the evidence, analysts determine if an ignitable liquid is present in the evidence. Since petroleum products are everywhere in our society, the analyst needs to understand matrix interferences and contributions. Ignitable liquids can be inherent to the matrix which complicates the interpretation of the data. Using gas chromatography/mass spectrometry (GC/MS), analysts classify the results into a common grouping of ignitable liquids such as gasoline or medium petroleum distillates; however, individual brands cannot be identified. 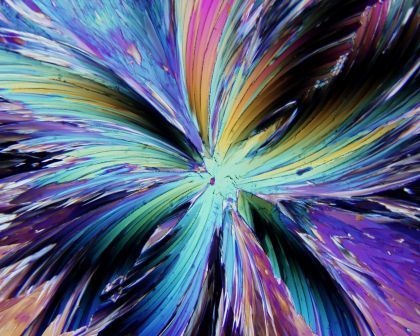 Technology in the field of trace evidence increases constantly and the Trace Evidence section has capabilities in the areas of digital photo documentation of microscopic examinations, color analysis of paint and fiber samples and elemental analysis of a wide variety of submitted samples that adds significant discrimination and association capabilities.

Training can be provided regarding the different aspects of trace evidence collection, packaging, documentation and capabilities. You can contact a staff member regarding any questions you may have.